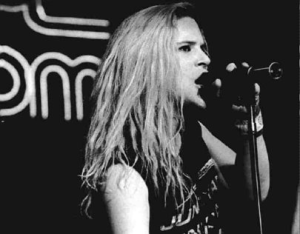 He grew up with his two brothers Kevin (with whom he later played in Malfunkshun) and Brian on Bainbridge Island near Seattle. His parents divorced when he was baby. When he was a teenager, he started to play piano and bass, and compose songs. Together with Kevin Wood (guitar) and Regan Hagar (drums), he created Malfunkshun in 1980. They soon became famous in the local rock scene, thanks largely in part to Andy who took the name L’Andrew the Lovechild and appeared wearing white make-up. The whole band created their own legend claiming they were love gods who stepped out of Olympus to play love rock.

Andy delved into drugs just as Malfunkshun became successful in Seattle. He successfully went to rehab in 1985. In 1987, Malfunkshun recorded the tapes for their debut album Return to Olympus (published in 1995). Andy then formed Mother Love Bone together with Stone
Gossard (guitar), Jeff Ament (bass), Bruce Fairweather (guitar), and Greg Gilmore (drums). He then totally devoted himself to Mother Love Bone.

In 1989, Mother Love Bone signed with Polygram and began recording their first EP Shine (released that March) and their debut album Apple, which was supposed to be published in March 1990. On March 16, Andy was found unconscious in his appartment. He overdosed heroin and, after spending three days in coma, his family decided to turn off the life support.

Andy’s bandmates and friends commemorated him by recording an album under the name Temple of the Dog (1991). The band soon transformed into Pearl Jam, becoming one of the most important groups in music history.

Andy’s body has been cremated and a memorial plaque has been established at the Miller-Woodlawn Funeral Home in Bremerton.

If you are not able to go to Bremerton, you can light the candle for him here.

This site uses Akismet to reduce spam. Learn how your comment data is processed.